A couple of years ago I thought I’d return to work as a graphic designer. I stopped working about 13 years prior and the world of computer graphics had changed tremendously in my absence. I was surprised when I found a position with the hands on training I wanted in order to be competitive in the industry. My new employer was aware of my background and of the experience I felt I was lacking, but she was willing to take a chance. The job was to create graphics that were to be inserted into a website.

My first day on the job, I was informed that both my boss and the co-worker that was training me were leaving on vacation at the end of the week.  My co-worker gave me instructions, guided me and answered questions. Day two, I could no longer take up my co-worker’s time as she had her own stuff to do. I had a long list of steps to follow for creating the graphics and that was that.

For two weeks I followed the list and fell into a rhythm thinking things were flowing smoothly. It was in the naming of the files that I made my mistake. Somewhere along the way, I missed a beat. I was supposed to save the files with a (dot) after a (number) or something and at one point without realizing, I left out the (dot).  I developed a routine and for remainder of the time on my own, I created files and named them incorrectly.

When she returned, my boss began inserting the files I’d created into the website and they didn’t do what they were supposed to, so she fired me. She explained what I’d done wrong, and I thought, okay, I can correct that. But she said, she couldn’t afford to have me correct two weeks of error. I offered my time for free willing to do what was needed to get it right. I reminded her that no one ever checked my work prior to their leaving me on my own, and she said, no one should have had to check my work!

Fortunately I didn’t need that job. I wanted it and I was eager to learn, but I was in an environment where mistakes weren’t tolerated.

More recently, a friend needed car seats for a hot rod he is rebuilding. He offered to pay for the upholstery class if I built the seats as my project. I agreed to what turned out to be a most exciting challenge. The seats were to be built from scratch. I only had the metal frames as a guide. With my instructors assistance I created patterns and crafted the seats to fit my friends 1937 Ford.

Many mistakes were made along the way. At one point it felt my sewing was merely a set up for seam ripping. It’s frustrating taking things apart and starting over, but at the same time, it feels good to solve problems and figure out how to make it work. I was grateful to be in a place where the mistake wasn’t considered failure, but an opportunity to grow.  I walked away feeling victorious in my accomplishments.

Too often we let our mistakes paralyze us when they should propel us to make a change. 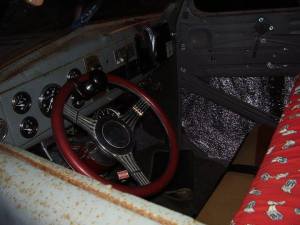 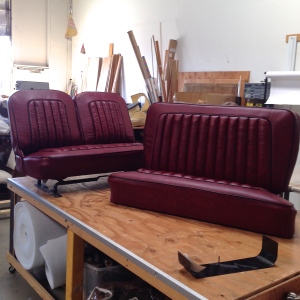