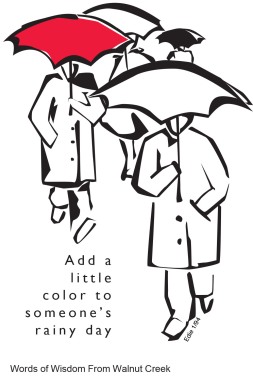 The owner of the really cool green linen jacket that hung in the lifeless cubicle, finally returned to the office. I noticed the jacket when I began working a few weeks earlier. It was simple in it’s design, however, it was the unique color that attracted my attention. I wondered why the jacket was left to collect dust all those weeks. Perhaps it was meant to be a decoy in case the “boss” walked by, giving illusion that this person was at work, but simply away from his desk?

Brian, the owner of the jacket was an engineer who had been working in Lisbon collecting data that was to be included on a map my department was creating.

While we listened to music from a portable CD player, Brian would list off the longitude and latitude points where cell sites were located. I would find the points on the big gigantic map and stick on little yellow dots to represent the cell sites. For hours that turned into days, I would place yellow dots on the big gigantic map. The map would later be photographed, reduced, and finally used in a presentation that offered cellular phone services to the country of Portugal.

Before moving to the Bay Area from Southern California, I went back to school to hone my  graphic design skills and learn the computer just so I could get a job where I stuck yellow dots on a gigantic map.

Brian worked for the international side of the company and would travel often, sometimes for weeks at a time. When he was in Rome (having his pocket picked while giving directions to Bocca della Verità), it was his birthday and his mother arranged to have a chocolate cake delivered to his hotel room. I remember thinking how nice it was to have care packages and such while on these assignments. Kinda like being away at summer camp or in the dorm at college and grandparents would write and send the occasional treat to make you feel special.

I agreed to collect Brian’s mail from his apartment and send it to him through the inter office transfer system while he was away. Along with the mail I would include a personal “greeting card” that was printed from the computer. I’d create an illustration with a simple phrase that said hello. My own little Hallmark ; I called them “Words of Wisdom from Walnut Creek”. 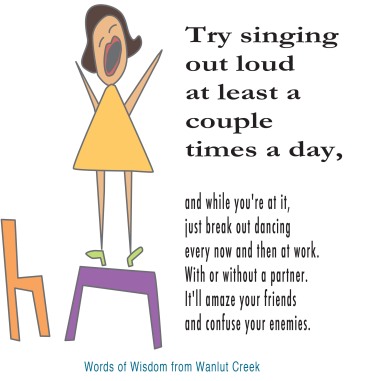 I remember printing one of the illustrations. It still needed a little tweaking, so I left that first version on the desk of one of the assistants. The next morning, the assistant saw my illustration and asked if I could print another copy because she wanted to give it to a friend. No problem. From that point on, I began making multiple copies of my “Words of Wisdom” which were being pinned up in cubicles throughout the office. I printed them weekly and it became a cheery little way to wish everyone a happy day.

I never considered myself an illustrator, but creating these helped me develop a style by scanning my doodles and tracing them in Adobe Illustrator. I’d thought of starting a line of greeting cards, but… well…. uh….

I’d borrow phrases I read somewhere and create an illustration to go with it or I’d use my own wit and wisdom to come up with a something. Sometimes I’d take a quote from the Bible and the illustration would be used for the cover of our church bulletin.

On the top floor of our building, the Executive Offices, there was a rotating art gallery. It was run by a gallery owner in San Francisco that brought in works from artist sall over the world. At one point the employees were given opportunity to display their own work. I printed a couple of my “Words of Wisdom” in a large format and they were used in that exhibit.

Recently I rearranged furniture, got rid of some “junk” and moved things into what used to be my son’s room to create a nice working space for me and my many projects. In a box I found some old Zip Drives the copies of my “Words of Wisdom”. I decided to update the files and save them into a more current format. A walk down a digital memory lane.

These files are nearly 25 years old. Brian and I have been married 22 years years ago. Time flies. 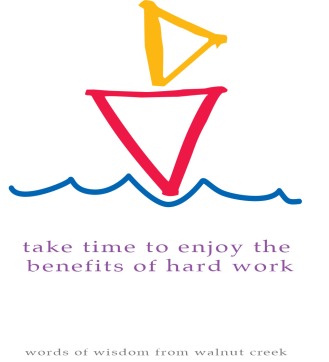 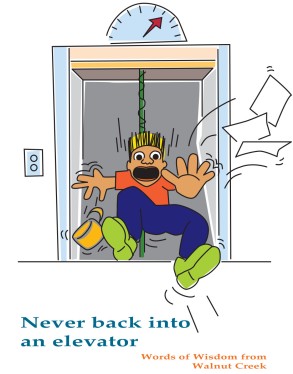 One thought on “Words of Wisdom from Walnut Creek.”